Defense skills are an important part of becoming a great soccer player. Although defense might not seem like the exciting part of soccer when compared to attack, it’s an essential part of soccer. In fact, roughly half of your game time will be spent defending. A team without defense skills is more likely to concede more goals and lose matches. Meanwhile, a team that is good at defense is more likely to have possession of the ball and be able to create chances. However, it’s always possible to improve your defense skills! The best way to become a better defender is to incorporate defense drills into your soccer training. The key skills that are targeted during soccer defense drills are pressure, cover, and balance. Here at Playform, we’re here to help make your life easier by recommending the best defense skills that will help you brush up on your defense skills in no time. Keep reading to find out more about the best defense soccer drills you should incorporate into your soccer training.

Before you get started with defense drills, it’s helpful to know a bit about what makes a good defender. First of all, the closest defender to the ball should always apply pressure. This strategy can cause the attacker to make a mistake and allow for the defender to take possession of the ball. Additionally, balance is the ability of a team to effectively position themselves defensively to prevent the switching of the ball to the other team.

In this drill, the team is split into two groups of defenders which start on both sides of the goal. Two attacking players will be positioned outside the penalty area on both sides of the attacking final third of the field. On the coach’s command, the first defender on both sides of the goal progresses forward to close down their attackers. They should aim for a fast-controlled approach and position their bodies between the ball and the middle of the goal. This drill helps players to work on the speed of their approach, body posture, and positioning. 4-5 repetitions of this drill should be enough, however, it can be repeated as many times as necessary to ensure players are comfortable with approaching the attacker. 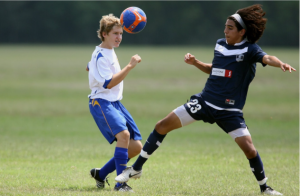 The Defensive Speed Course helps players to improve their defensive speed and quickness in front of the goal. Defensive players begin lined up in front of 6-8 training hurdles and three training sticks set 5 yards apart. At a quick pace, players must quickly double step over each hurdle, ensuring that their feet are placed between each hurdle. After completing the hurdles, they must make their way to the first training stick and follow a quick 45 degree cut before moving on to the next training stick. At the last training stick, they must make a 90 degree cut before sprinting to the top of the 6 yard box.

The main goal of this drill is to allow players to focus on defending the ball while dribbling. Setup involves a 10×10 grid with a cone at each side. The team is split into two groups and given different coloured pinnies to distinguish the two groups. Teams are lined up on opposite sides of the grid facing each other. A defender will be positioned in the middle of the grid. One player starts as a defender who must attempt to win the ball from the attacking team as they dribble through the grid and out the other side. If they are able to win the ball or it goes out of the grid, the player that lost the ball becomes the next defender. If the attacker is able to dribble the ball through the grid without losing possession, they then pass the ball to the next teammate in line who becomes the new attacker.

This defensive drill is perfect to give players practice in clearing difficult balls high and wide. The drill uses half of a full size field with one defender on the goal line of their goal. 4 severs begin scattered around the sidelines, each with a supply of balls. A few players will be placed high and wide on the field and act as target players. The drill itself begins with the defender on their defensive goal line. The servers will take turns serving flighted or low driven balls into the penalty area. The defender has to quickly move from the goal line and clear the ball to one of the target players. The goal is to make sure each ball clears the penalty area before it hits the ground. Each defender takes 8-10 serves before rotating.

Now that you’ve got an idea of some of the best soccer defense drills to incorporate into your soccer training, we’ll share some of the most important coaching tips for creating good defensive players. One of the most important things a soccer defender should focus on is keeping their knees bent and their weight on the balls of their feet with their chest over their toes and a staggered stance. By keeping this posture, the player will always be prepared to defend against any attacker.

Also, you might have heard the saying that claims that attack is the best defense. This saying rings true, because after all, if you’ve won the ball and can keep it away from the opposing team, there’s nothing for you to defend. If you still want to build confidence with your defensive soccer skills, visit the Playform app for expert tips and soccer drills to help you get started.

Being a good soccer defender is a key part of being a good soccer player. By incorporating these soccer drills into your training, you’re one step closer to becoming a better defender and a better overall player. If you need some extra practice, download the Playform app and take advantage of our wide range of drills to help you practice your defensive soccer skills.