Shedding a tear today as I write the final Upset Watch of the season. Which teams need to be on high alert this weekend?

No. 13 Florida State (9-2) at No. 12 Florida (10-1), 7:30 p.m., ESPN. Line: FSU by 2. On paper, Florida State has the edge in a variety of categories. It has the best offensive player in the game and a defensive front with the ability to overpower a shaky Florida offensive line. Its defensive backs should have an edge on the Florida receivers, too. But Dalvin Cook will be going against the best defense he has played this season — that Gators unit is as salty as it gets. The Florida defensive backs should also win their matchups against the Florida State receivers. So this one is no slam dunk for Florida State, even though it has won four of the last five. If the Gators can get Kelvin Taylor going a little bit and shut down Cook, they will have an opportunity to squeak out a win.

Louisville (6-5) at Kentucky (5-6), noon, SEC Network. Line: Louisville by 4. Do you have any idea which Louisville team will show up on Saturday? And will that team give consistent effort for the entire game? Watching Louisville this season has been especially maddening because of all its starts and stops. Coach Bobby Petrino admitted there have been many ups and downs, and called last week’s loss at Pittsburgh a disappointment. While Kentucky didn’t have the breakthrough season many thought it would, a win here would get the Wildcats bowl eligible, and they are at home. Last year, they nearly pulled the upset. When it comes to Louisville, it is hard to make any guarantees this season — even though it has won five straight in the series.

Virginia Tech (5-6) at Virginia (4-7), noon, ESPNU. Line: Virginia Tech by 3.5. The Hokies have won 11 straight in the series, but the last three meetings have been decided by a touchdown or less. Virginia played its best game of the season last week in a win over Duke, so that is sure to give the Cavaliers more confidence going into a game they so desperately want to win. Plus, all four of their wins this season have come at home. Virginia Tech, meanwhile, needs a win to become bowl eligible for the 23rd straight season in Frank Beamer’s final regular-season game. Virginia would love nothing more than to end that bowl streak in what could be Mike London’s final game as Virginia coach.

knetizen is the Best entertainment and News Blog 2022 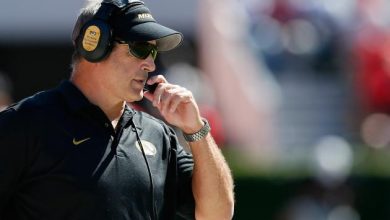